Lets start this off with a multiple choice question!

What is a Code Orange?

(A) bomb threat
(B) A radioactive spill
(C) A potentially violent person with mental issues in the hospital; show of force needed
(D) External disaster with mass casualties 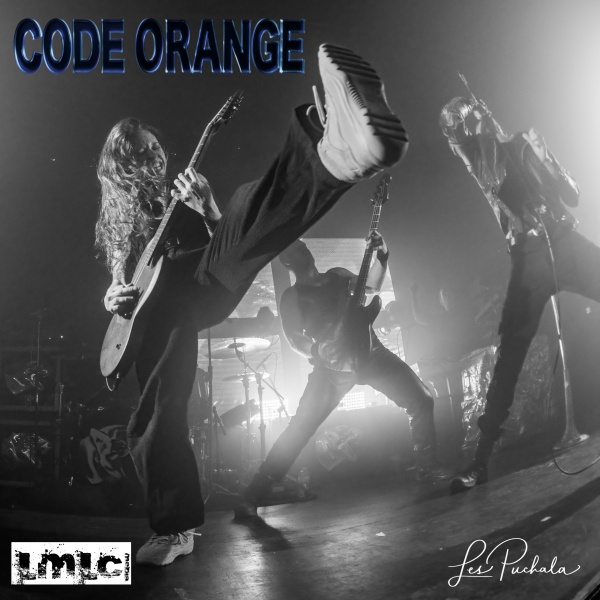 If you guessed (E) — you’re correct as that was the band I will talk about that headlined tonight’s show at the Rickshaw Theatre in Vancouver.

Last time I had the pleasure of seeing this ruckus was back in 2018 at the Commodore with them supporting Meshuggah.  What an great pairing that tour was.   After I saw Code that night, I was completely blown away.   They have a fresh modern metal sound, along with industrial, hardcore and electronic elements.  I declared that these guys are the future of the extreme music scene after seeing them pull it all off live.   I still believe this.

Since then they have released a new album at the start of the Covid19 pandemic in March of 2020 called “Underneath”.   But there have been some changes in position I see since 2018.  The most noticeable is Jami Morgan taking a Frontman position instead of singing whilst pounding the drum kit.   They now have Max Portnoy on drums, and yes, he is the son of former Dream Theatre drummer Mike Portnoy.  Others in Code are Reba Meyers and Dominic Landolina on guitars, Joe Goldman is on bass and Eric Balderose on Keyboards.

The band launches with ‘Out for Blood’ from the new album with red lights blazing everywhere on stage.  One memorable thing I tell everyone about this band is the energy they produce on stage.  They are karate kicking, headbanging all over the stage, playing guitars pointed vertically, and just pure chaos that is just turning the fans into a zombie moshing frenzie.    ‘Forever’ is a faster one that has a break down around the 2:30 mark that has heads headbanging in the crowd.

Being that they are headlining this show, they brought along a cool set of screens in the background with lots of cyborg futuristic imagery.    They actually slow it down with song 5 with slow moaning lick at the start with ‘Sulfur Surrounding’ and Reba doing the vocals on that.   She plays a prominent role in the vocals on a few of the bands popular tracks such as ‘Who I am’, ‘Underneath’ and my favorite ‘Bleeding the Blur’.  Jami’s vocals, and his general “mojo” I find are reminiscent of Rage Against the Machine’s Zach de la Rocha.   He certainly has that rap and hardcore attitude that really makes this band dangerous.

They end the night (14 songs this night) with the 1st track off the new album ‘Swallowing the Rabbit Whole’.  I remember hearing this one for the first time and wondered if my copy had some weird glitches in it, but those are planned unpredictable glitches.   Oh, and incase you wonder if they keep up the complete bedlam on stage the whole show, that they do.   I have no idea how they do it night in and night out, but they certainly put on one KILLER of a show.    Go check them out on tour and pickup the new album “Underneath”.   If you want extreme, give it a listen!