Previous Details Released – New Ensiferum
Next Downside (Australia)
NIGHTWELL, the best kept secret in Toronto emo-rock have premiered the breakfast inspired video for their latest single “Bittersweet” via Exclaim! Watch it HERE!
It’s funny how something as simple as going out for a meal with your friends can be taken for granted. With the release of their new video for “Bittersweet,” Nightwell is looking back to better days. Filmed by collaborator and friend Roberto Spadafora, the video unknowingly documents the bands’ last day together pre-lockdown.

Nightwell comments, “Over the last year, we’ve been working with Roberto Spadafora on all of our music videos. Rob has been getting all kinds of footage of us doing a lot of silly things. Before a shoot one day, we decided to go get some breakfast. We laughed as one of us jokingly suggested filming us to eat our food and just use that for our next music video. Next thing you know, Rob has the tripod out and our orders of eggs were in. We laughed and enjoyed our food, unaware that it would be the last time we would see each other before the COVID-19 pandemic would hit. Now that we’re all staying home and self-isolating, going out for breakfast with friends might not be possible for a long time.”
“Bittersweet” showcases the best of Nightwell’s emo-inspired alt-rock sound with traces of reverby ambiance, mixed with crashing choruses. Stream “Bittersweet” HERE!
The band recently released their self-titled album, and while coronavirus may have ground their activity to a temporary halt, the band are adapting to the current live-streaming climate and are hard at work on new music. 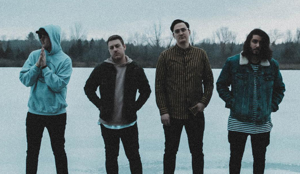 About Nightwell: —  Formed in 2017, Toronto emo-rock band Nightwell is one of the city’s best kept secrets.
Influenced by 00’s post-hardcore, modern emo and 90’s R&B Nightwell is more than just your average “emo” band. Armed with new vocalist Jason Emsallem and fresh inspiration, Nightwell released their debut single “Drive” in 2019, followed by a cover of Post Malone’s “Stay”, featuring the infamous Saxl Rose. In January 2020, Nightwell dropped their second single “Confident” to rave reviews. The heart wrenching single “Ball in a Box” and the follow up to their first single, “Runaway” came shortly after. All four songs can be found on the band’s debut album “Nighwell” which was released April 3rd, 2020.
Connect with Nightwell:
Website: http://nightwell.ca/
Instagram: https://www.instagram.com/nightwellca/
Facebook: https://www.facebook.com/nightwellca/
Twitter: https://twitter.com/Nightwellca
Posted by Taylor Irene / Irritated Media
Tagged: Nightwell