Doom metal experimentalists, VILE CREATURE, have today premiered the video for the first single to be taken from their upcoming album. Earlier this month the duo released the track You Who Has Never Slept, and now the spooky video has been unveiled exclusively via Metal Injection. The track is taken from their new LP, titled Glory, Glory! Apathy Took Helm! which will be released on June 19 and is available to pre-order now.

Of the video, the band comment:
“Raissa and Dave are two wonderful people we met working our food truck, they knew we played music and offered to help us with a music video one day. Fast forward a few years and we were finally able to take them up on their generous offer. We rented out a theatre in small town Ontario for a day with a bunch of friends, and crafted this vision for the song. All of it was held together by the amazing work of Anita who starred in and choreographed the video. We were inspired by psychological and abstract horror films, most obviously Susprira. We wanted to craft a linear narrative that still kept you wondering and interested – our songs are long enough that any music video is really a short film.”

VILE CREATURE has been constantly evolving during their six years as a band; from each release to the next, the Hamilton, Ontario duo have been pushing the boundaries of their own creativity, and testing the limits of their own place in the world. Nowhere is this more evident than on their latest experimental doom metal album, Glory, Glory! Apathy Took Helm! VILE CREATURE are digging their heels in, ready to fight against the all too easy slide into nihilism – as embodied in the sardonic album title. 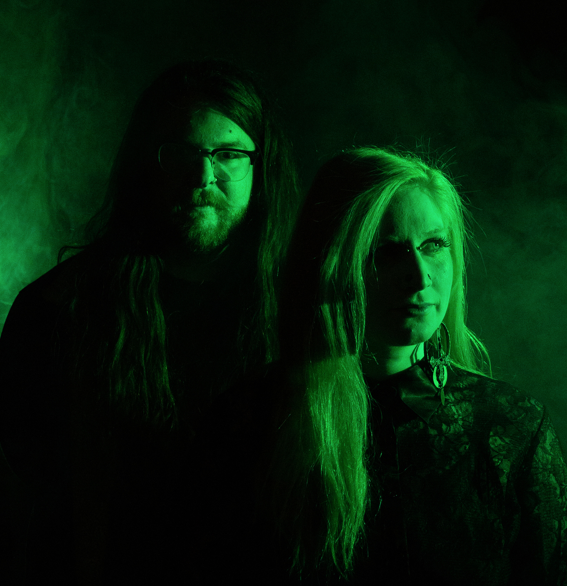 Opener, Harbinger of Nothing (which first emerged on an Adult Swim compilation in 2019 and was re-recorded for the album) provides a jumping off point for a record that traverses a myriad of raw, real life experiences and marks a distinct new chapter for the band. The album features contributions from vocalist Laurel Minnes and her choir, Minuscule, and additional instrumentation from Bismuth’s Tanya Byrne. VILE CREATUREremains embedded in the oppressive sounds of doom and metal, only now they are covered with a luxurious veil of majestic embellishments.

Recording took place in February, 2020 at Boxcar Sound Recording in Hamilton, Ontario, with Adam Tucker once again in the producer’s chair. With Vic’s evocative and primal vocals often taking centre stage, their marked growth in confidence as a performer is evident. By collaborating with photographer, Danika Zandboer, the trio have fashioned a striking visual accompaniment  – manifesting the psychedelic and theatrical influences that become present in both audio and visual form.