All is Well with Toronto’s “Nightwell”…..

“Thank You” marks a new era of creative expansion, experimentation, and unity for the Toronto band and introduces a sound lamenting poetic symmetry inspired by R&B and rap vocal styles, elevated by the band’s continued fusion and appeal to pop structure that stem from their rock and metal influences. There is something to be dug about Nightwell for every kind of music fan.

“Thank You’ is the moment of doubt you have two years after the breakup, when you’re doing better physically and mentally but somehow still  feel nostalgic about that time in your life. You end up taking the day to remind yourself of all the reasons you left, replaying arguments, remembering their red flags. It’s part of healing to miss someone, and the world and people around you won’t truly be able to help. It takes self-reflection, self-love, and time to really mend the wound. I hope someone feeling lonely and nostalgic can relate and know that even on your lowest days, you end up coming away with the most answers and growth.” -Nightwell

“Thank You’ was co-written/produced by Brendon Padejasek alongside our guitarist/producer Kyle Marchant. We knew we wanted to write a more ‘production’ heavy song in the verses and grow it bigger and heavier as the song progressed. The biggest challenge of this song was the chorus. I feel like we restructured it a bunch of times but it’s my favorite chorus/hook that we have ever done!” -Nightwell

“The video was directed by Nightwell alongside our videographer Rob Spadafora. We were inspired by rap videos from Slowthai and Aries. We wanted a ton of quick cuts, random edits, and locations. We always loved Dylan Gould’s wild edits and color-grading, so we knew he had to be a part of the project. It really took shape in his hands.” -Nightwell 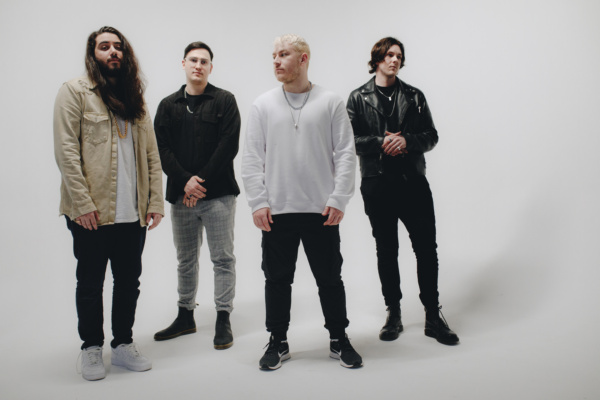 Nightwell is a 4-piece rock band from Toronto started in 2015 by guitarist Cole Hardy and drummer Terrance Pettitt as a simple side project with an initial emo/hardcore vibe. As new members Kyle Marchant and Jason Emsallam joined, the sound continued to evolve beyond each’s former influences.

Nightwell released their self-titled debut album in spring of 2020. Songs from that debut, “Medicate” and “Confident” bred the beginning of the current Nightwell sound and marked a clear path for them to embark down cemented by pop structures and energetic powerhouse rock choruses most recently heard on their latest single “Hate Me” featuring Brendon Padjasek of metalcore band STRUC/TURES.