Previous The Story of Metal Blade!
Next Orlando – 2021

Gloom-pop duo GHOST TWIN have announced Love Songs for End Times, the band’s sophomore album, due out June 4th. The band has leaked the first single from the album, Strobe Light, on Bandcamp. 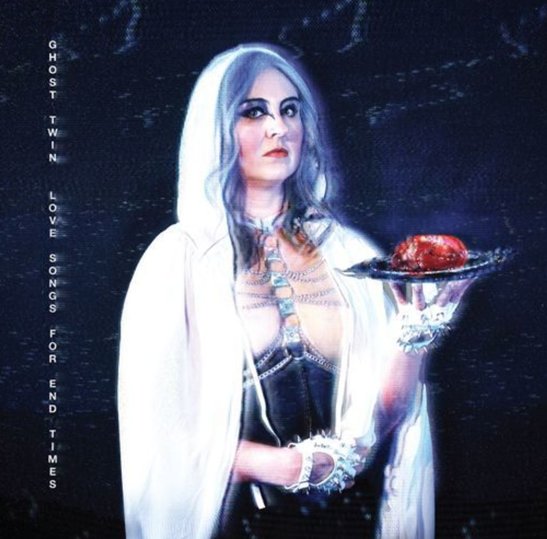 Four years after Ghost Twin’s debut for Artoffact Records, the Winnipeg, Canada-based duo returns with Love Songs for End Times, an album that promises to bring some much needed cathartic release through a prism of pop hooks, romantic ballads, heavy anthems and club stompers.

Ghost Twin explores the darkness of nostalgia on the new album, due out on Artoffact on June 4th, an approach that signals a turning point for the band. Karen and Jaimz Asmundson, longtime artistic collaborators and husband-and-wife, take turns crooning fatalistic lyrics as elements of 80s synthpop, Industrial, German Techno, French House, and a knack for writing earworms, competing for your attention.

“While our music has always been extremely personal, in the past we’ve hidden our meanings behind a veil of esoteric symbolism – but with this release we’ve put our hearts on a platter,” says Jaimz.

The new album is familiar baroque territory for fans of the band’s debut, but things are simpler on Love Songs for End Times, perhaps simple because these times really are apocalyptic; perhaps simpler because these times call for a revolt against the decadence of the baroque. Either way, the results are spectacular, evoking the light touch of contemporaries Boy Harsher, the knack for melodious synth hooks a la VNV Nation, and the irresistible back-and-forth of The Human League’s “Don’t You Want Me.”

“Throughout history the end of the world has been forecast thousands of times because everyone thinks that they’re going to be the generation to witness it, and can’t comprehend the world going on without them. But right now, we’re all especially feeling that overwhelming sense of impending doom. This record is the soundtrack to a simpler time when the end didn’t feel so real and was just the plot of some sci-fi trash, set in 2021, that you rented from the video store.”

Love Songs for End Times is available on CD, vinyl, and digital formats on June 4th.