DOCUMENTARY FILM GET BACK UP  OUT NOW – WATCH TRAILER

“This album is about embracing the darkness and feeling the romance in life again,” says frontman Justin Furstenfeld, about Blue October’s tenth studio release, This Is What I Live For.   “I’ve always wanted to make my ‘Cure Disintegration’ album, and this would be it.  It’s nice, it’s mellow, it’s sad. It’s slow, it’s romantic, it’s nostalgic. But it just rocks so damn hard.”

This Is What I Live For was produced by Justin at his own Up/Down Studios in San Marcos, TX, and the song “I Will Follow You” was recorded at Peter Gabriel’s Real World Studios.

Watch Blue October’s video for “Oh My My,” the band’s first Top 10 single at Alternative Radio since 2009.   Since going independent, Blue October’s base has grown immensely, and is now averaging over 100 million streams a year (almost 800 million total), with 15 Top 40 radio singles in 14 years.

On September 26 at 9:00pm ET from the Texas foothills, the band will perform their 2006 platinum album Foiled in its entirety, including the hits “Hate Me” and “Into the Ocean,” and will perform audience favorites from their past 10 albums.  Tickets for the livestream concert are available on Blue October’s newly-launched channel, Get Back Up TV. 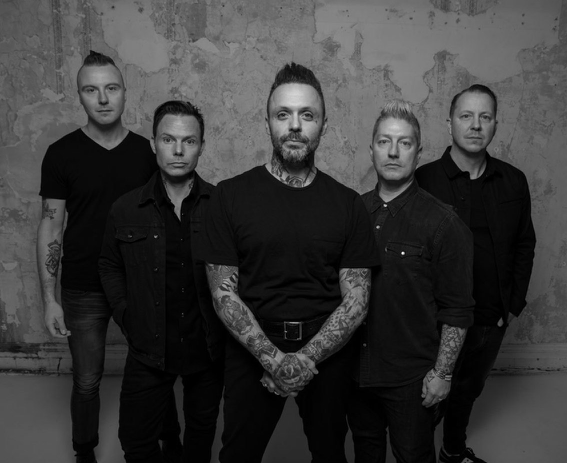 Filmed over seven years by director Norry Niven (Ray Donovan, Dexter), Blue October’s new documentary Get Back Up is a redemption story that chronicles Furstenfeld’s harrowing drug addiction, bipolar disorder and depression, and how his family and bandmates helped him pull through.  It’s hard to do it alone.  “I always knew my head and heart were different.  My head was darker, and my heart was much bigger,” reflects Justin.  “There’s always hope.”   Get Back Up is available for streaming here.

A husband and father of three, Justin has been spending lockdown at his hometown of San Marcos, Texas, where he’s been broadcasting free weekly show ‘Positively Justin’ on Tuesday nights (on YouTube, Facebook and Instagram).

Early in the pandemic, the series began as a way to connect and keep spirits up.  During the initial live stream, Justin used the 12 Step program in a more universal way:  to help those with depression and in need of support during COVID isolation, and it was eye-opening for him.   “I want to provide people with as many tools as I possibly can, so you can go back to that war chest,” Justin adds.  ‘Positively Justin’ is now an interactive, all-request and storytelling show, and all content is archived on Get Back Up TV.

Blue October was formed in high school, 1995, San Marcos, Texas, by Justin Furstenfeld and multi-instrumentalist Ryan Delahoussaye, and features bassist Matt Noveskey, drummer Jeremy Furstenfeld and guitarist Will Knaak.  Justin adds, “Whenever we get back on the road, we’re going to tour forever.”