Watch the Video for “Never Look Back” via Heavy Consequence

The video for “Never Look Back” is available now, exclusively via Consequence of Sound’s Heavy Consequence at https://consequenceofsound.net/2020/04/marishi-ten-never-look-back-premiere/. The single is available via Apple music at http://itunes.apple.com/album/id1502703114?ls=1&app=itunes.

“Every challenge is an opportunity,” Linda Lou says. “That belief has never failed me and in the most difficult of times it serves as both motivation and inspiration. It’s a message that is very much imbedded in this song and may be more helpful than ever to hear right now.”

MARISHI TEN was born by Lou’s desire to conceive a band that would encompass the foremost characteristics of time-honored heavy metal and hard rock. A solid, riff-driven composition complete with sweeping melodies and a fierce approach, “Never Look Back” is the embodiment of the frontwoman’s objective.

The video for “Never Look Back” was directed Matt Mahurin, the American illustrator, photographer and film director best known for his iconic music video work on Metallica’s “The Unforgiven,” R.E.M.’s “Orange Crush” and U2’s “With or Without You.” The song was produced by Mitch Marlow (He Is Legend, Filter, In This Moment) and mixed by Jay Ruston (Anthrax, Amon Amarth, Stone Sour, Avatar).

A seasoned touring musician and songwriter, Lou launched MARISHI TEN via a Kickstarter campaign that resulted in an innovative and fundamental EP. The EP paved the way for the project’s exponential creative growth through a series of radically unconventional single releases.

Inspired by the samurai goddess of light, the band derived their name as an homage to the deity’s primary characteristic – fearlessness actualized through self-mastery. It seems only fitting that through such mastery, a guitar wielding front woman, influenced by the gods of metal before her (Black Sabbath, Judas Priest, Metallica) would arrive as a new legend for whom the world is waiting! 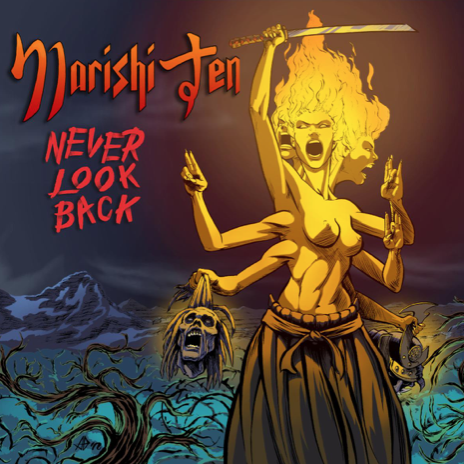