The band also recently revisited the song “Lycanthrope” from their Reign of Terror album, revealing a brand new, campy video for the classic track. The song was produced by the late Mike Scaccia (Rigor Mortis, Ministry), who can also be heard performing the main solo on the track.

Watch the video today via Metal Injection at https://metalinjection.net/video/rabid-flesh-eaters-new-album-features-final-recordings-of-rigor-mortis-bruce-corbitt. 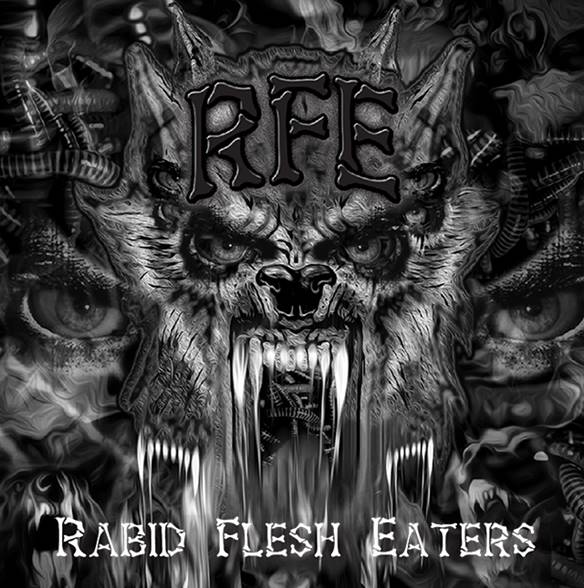 “When the guys at Cyclonus Video said that they wanted to make a new video in 4K and needed a heavy song, we immediately thought of ‘Lycanthrope’ because we wanted to pay homage to one of our biggest musical influences – Mike Scaccia,” says guitarist Mike Taylor. “At that time, we were really missing our friend and brother, since it was right around his birthday. Also, he made our last album possible, and out of all the songs that we had in the can, ‘Lycanthrope’ made the most sense for the video because he also played the main guitar solo. Besides producing and playing on the song, Mike did a ton of pre-production work with us. He had us work through every song at many different tempos, and he directed us like an orchestra conductor emphasizing different accents and hooks. Mike helped us learn how to better focus as musicians, and he truly elevated our performance level by whipping us into shape before even stepping into the studio.”

After over 30 years of a brotherhood founded on the searing fire of classic metal bands like Black Sabbath, Motörhead, Slayer, and Rigor Mortis, the aggressive foaming at the mouth sonic assault of the R.F.E. is more relentless than ever.

“We recommend people get vaccinated for rabies before they listen,” teases bassist John Hill.  “Even a man who is pure of heart, and says his prayers at night, may become a wolf when the wolfbane blooms, and the moon is full and bright.”

“We feel Mike Scaccia’s and Bruce Corbitt’s spiritual energy around us every day, both when we’re making music or just hanging out,” says Hill. “When these tragedies happened and we lost our buddies who played with us and encouraged us for so many years, we realized that it was high time to honor their legacy. We feel that we’ve done our best to do their songs justice and keep their spirit alive with ‘R.F.E.’”

But make no mistake: R.F.E. is not some sort of Rigor Mortis cover band. While R.F.E. is a visceral homage to their longtime friends, the increasingly angry and aggressive band is fast expanding their influence with their latest epic album.  R.F.E. sets new standards for today’s speed metal genre through their own original tunes, such as “Demons Within”, which tackles the dark reality that the demons one needs to conquer are the ones that hide within; and “The Fall,” a searing self-reflection on how those demons can drive one over the edge of sanity.