When I heard that veteran punk rockers, The Offspring were making their way to Abbotsford Arena — I knew this time I had to be there to cover this show.   After all these years this would be my first time seeing these rock icons and I am quite thrilled they are playing mere minutes from where I live.   Believe me, there are lots out there still excited to see this band live, as 5500-6000 people packed the Abbotsford Arena to see them and I wonder, can this band still provide enough entertainment to headline this show?

The band formed in 1984, but never really had commercial success until their “Smash” album in 1994.   They haven’t released a new album since 2012’s “Days Go By” but from what I hear, they are going to release some new material in 2020.   The band still has its two core songwriters with Dexter Holland (vocals, guitar), Noodles (lead guitar), along new bass player Todd Morse, Pete Parada on drums and touring member Jonah Nimoy (guitars, keyboards, percussion). 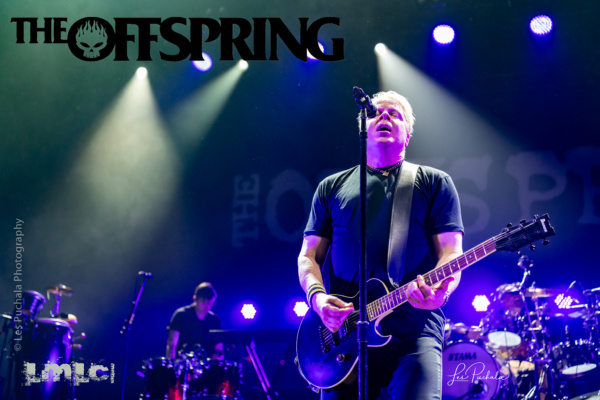 The band starts off with ‘Americana’, which is a blistering punk style song that sets the tone right away.  Same with song 2 with ‘All I want’ (1997’s “Ixnay on the Hombre), another searing punk song that keeps the momentum churning.   But the show really kicks in with a song about gang violence in schools called ‘Come out and Play’ from “Smash”, that really gets the crowd up and singing along.

They actually had Jason “Blackball” McLean at the show, to deliver the famous phrase, “Gotta keep ’em separated (https://www.youtube.com/watch?v=1jOk8dk-qaU ).

Speaking of separated, the boys don’t move around on stage like they might of in those videos from the 90’s.   They pretty much stay in their own zones on the stage.   I don’t think I saw any of them leave their spots during the entire show.

You know what really surprised me about this show is the strength of songs in their catalog. You don’t realize how deep when you hear ‘Staring at the Sun’, ‘Bad Habit’, ‘Gotta Get Away’, ‘Why don’t you get a Job?’, ‘Cant get my head around you’ and ‘Pretty Fly for a White Guy’.  Believe me, you have heard all these on the FM radio, and they sure had my foot stomping!  They also do an ode to some of their heroes and play ‘Blitzkrieg Bop’ (by the Ramones) and ‘Whole Lotta Rosie’ from AC/DC.   Dexter’s voice actually did both those songs justice too.  At song 12, ‘Gone Away’ was played on a grand piano, a heavy moment of the show where Dexter talks “about losing someone close to you”.  This was a really well done by Dexter and shows he can handle the vocals on slower ballads.

At song 16, ‘The Kids Arent alright’ was another punk rock anthem they could not miss playing considering they started the show with some punk blasters.

Ok, so just as I say to myself, “ok that was a really good show”.  The Abbotsford crowd begs for more and a 2 song encore was absolutely over the top starting with ‘Your Gonna Go Far, Kid’.   That song really comes off amazing live, and has a crazy polka dance feel to it.  I would’ve stopped right there and said ok, that was performance of the night, but I forgot about the one song they didn’t play yet.  Just when I thought they played all the hits, the biggest hit ‘Self Esteem’ was played last to shake the barn down.

What a great show.  I am glad I got this one off  my bucket list, if you have never seen them live or somehow believe this band is washed up, think again!  I am certainly interested to see what they come up with for a new album in 2020.