One my most anticipated shows of this fall is with dutch vocalist extraordinaire, Anneke van Giersbergen, who brings her solo act to Vancouver’s Venue Nightclub.

I first heard Anneke as a guest vocalist throught Devin Townsend’s Addicted album back in 2009 as well as every album thereafter. Her angelic voice has appeared I every one of his albums since.    She has also collaborated with MANY a metal band,  including large acts as; Within Tempation, Napalm Death, Moonspell and many years with doom rockers –  The Gathering.   But like I mentioned, we get a solo show tonight with just her and her acoustic guitar.

Since we in Vancouver are very familiar with Devin Townsend, we were hoping for some material from one of his albums, and we are not disappointed as she starts off with Devin’s “Ih-Ah!”.   The Vancouver fans are just eating it up as she has everyone just mesmerized, as I weedle my way around them for some photographs of her.  She is definitely comical and an upbeat person, asking the crowd “would you rather hear Kiss or Dolly Parton”?   She settles with ‘Jolene’ from Dolly Parton, and she had the predominantly tough metal crowd singing it out loud too!   Heck, she can do that song better than Dolly can, its bloody amazing. One generous fan gives her a huge bouquet of flowers “wow, my gig is not even over!” she says.  I am betting she is the type that just lights up a room wherever she goes. 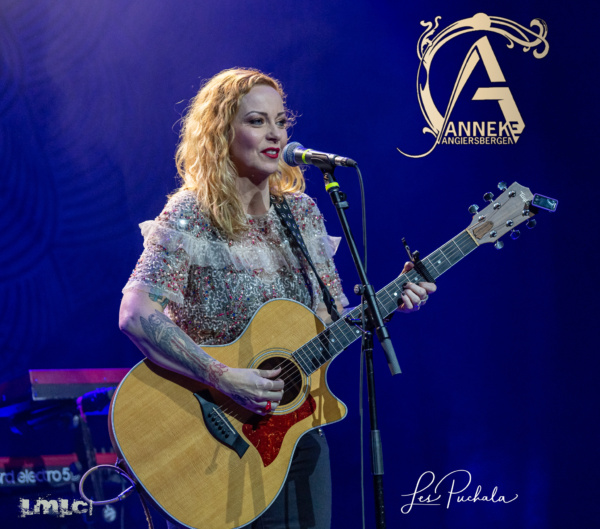 She also does an ode to Chris Cornell with ‘Like a Stone’ (from Audioslave), but when she sings it, it’s so beautiful and clean, that it brings a tear to this reviewers eye.  Yes, I was under her spell at this point.   She can sing just about anything and get away with it,  such as Pink Floyd’s “Wish you were here” or Kate Bush’s ‘Cloudbusting’.   She saved the most metal song for last (10 songs tonight in total), with Iron Maiden’s ‘Wasted Years”, which she could make sound great around a campfire.

After her solo show, Amorphis played their gig thereafter and the 2nd last song of that gig, “Amongst Stars” (2018’s ‘Queen of Time album)  would feature Anneke again.  https://www.youtube.com/watch?v=Jg2VqUTNjsw). The crowd went nuts and she absolutely nailed the performance (pictures of that included below)

So really, we were lucky to see Anneke do her solo set plus a song she collaborated with such as Amorphis!   Go see her, DON’T miss her show !   Buy her merch, and like she says “I run on love, but the bus needs money for gas!”