Worldwide “Kings of Viking Metal” — Amon Amarth — brought their Berserker tour to Vancouver’s PNE Forum and the hordes of fans are ready for this melodic death metal onslaught of epic proportions.

These Swedes are the real deal and have been creating music with the Norse theme since 1998 with their latest opus being “Berserker” (Metal Blade) recently released in May of 2019.  The band is composed of Johan Hegg (Vocals), Ted Lundström (Bass), Johan Söderberg, Olavi Mikkonen and Jocke Wallgren (Drums).   They have come a long way over the years and have built a strong fan base.  The last time I saw this band was many moons ago at the Commodore Ballroom in Vancouver, which back then it was a minor show setup compared to what  I see tonight.   The have leveled up however and are headlining ahead of such acts as At the Gates and Arch Enemy.  So I am quite curious how they follow up to those hard hitters that have just played before them. 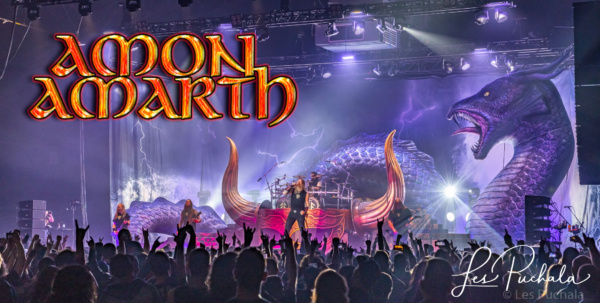 The curtain drops and  Johan is front and centre banging his head to ‘Raven’s Flight’  The 6 foot plus Johan sporting his Nordic armbands and a muscle shirt certainly looks the part of Viking as well with long hair and full beard.  Not to mention his gravely, guttural death metal growl voice when juxtaposed to the Scandinavian folklore fits perfectly.  Johan is certainly a charismatic front man that definitely fits this genre of metal, without a doubt.   The rest of the band is much the same, all very competent players that play crushing harmonies and tight bass along with Jocke’s marching drum lines.  Song 3 we get to ‘Deciever of the Gods’ (2013’s Deceiver of the Gods), with that hooky guitar at the start, such a great song with some nice solo work and then some nice pick work near the end of the song.

The stage setup is magnificent, with a large helmet with large horns where Jocke’s drumkit sits on top, it also has glowing eyes that change color or even different scenes such as ocean waves.   I think this helmet riser has been upgraded abit from earlier years, looks a little more detailed.    The back drop changes from mosaic themes, then to battle a scene which keeps with the theme of the songs.

Song 4 we get into ‘First Kill’, in fact we hear five songs tonight from the Berserker album, which are ‘Raven’s Flight’, ‘First Kill’, ‘Fafner’s Gold’, ‘Crack the Sky’ and my personal favorite off that album ‘Shield Wall’ (Song 10 this night).  During ‘Way of the Vikings’ (Song 8) we actually get some theatrics with a two man Viking battle, and unfortunately, one has his throat slit and dies (ok relax, not for real!).  We get a little more of that during ‘Shield Wall’ with the two Vikings but no battle but some sword and shield play. 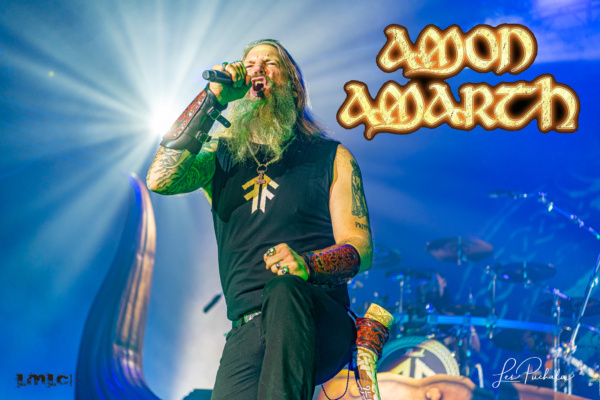 Before song 12 ‘Raise your Horns’, I was was pretty thirsty watching them by this point, as the boys do raise their horns and chug some brew down.  DAMN, I need a beer!  But hold on, things get hilarious in the giant mosh pit as a hundred or so moshers were sitting down and rowing (yes like in a boat) along to ‘The Pursuit of the Vikings’.  Too funny!

The night ends (14 song set) with a humongous, aggravated, Sea Serpent on stage during ‘Twilight of the Thunder God’.  This is my favorite Amon Amarth song by far and so happy the night ended with this one.   Johan had a giant hammer out, doing battle with it is quite comical!

Not a doubt, these guys are certainly ready to be in the upper echelon of metal bands.  They put on one whale of a show that is a MUST SEE.   I am pretty sure at this point of the year that this will be one of the best tours out there, so don’t miss this one!