Longtime fans finally get to see Lizzy at the Commodore Ballroom along with his macabre showmanship. I am for one, thrilled to finally see him as I was a major fan of the band back in the 80’s.   He has been doing this since 1983 and hard to believe Vancouver never got a show until now.

Frankly I was coming into this blind.  I didn’t know what to expect as I lost touch with Lizzy Borden over the last say 25  years.   So the show starts and Lizzy comes out in this elaborate costume with a mask and huge rack of horns sticking out of the top.   From the latest album “My Midnight Things” (Metal Blade), they start with the title track.  It’s a barn burner of a song too!  Lizzy surprised me here as his vocals are just as good as the glory days in the 80’s. 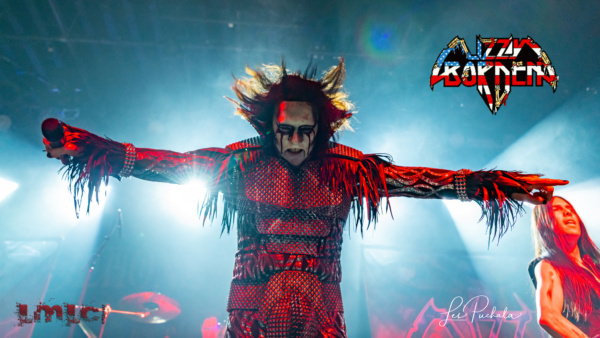 With exception of longtime drummer Joey Scott, its not the same band from 1983 however.  He has a new very ENERGETIC crew with Gray Trainer (guitar, short haired guy), Julian Salas (guitar), Steffan Salas (bass).  All very competent players, and appear to be having the time of their lives, all smiling and jumping around.    Sure adds a lot of excitement to the show!

Speaking of excitement, Lizzy sports various costume changes this night, the oddest one is where he appeared to have 3 faces (see pictures) during the 2nd song, ‘Tomorrow never comes’.    He is very captivating this night with just about a different look on every song.  Lots of theatrics with blood, axes, bats, and that phantom of the opera type look of his.   You definitely get full entertainment value with this show.  I was blown away how fun this show was to watch.

They hit 10 songs this night with a very even variety from each of his albums.  My standouts here tonight were ‘American Metal’, a song how I first learned of Lizzy back in the 80’s.  Wearing the USA flag and later in the song spreads his wings and has a Canadian flag and USA flag together.  Nice touch!  Also  ‘Me against the world’, it’s such a great song that sticks in your head.

I was thoroughly entertained by this show!  I am definitely going to get back into Lizzy’s catalog again.   Check out his new album “My Midnight Things” and FORSURE see him on tour!  It’s a show you will never forget!