It was a bittersweet time at the London Music Hall while playing witness to a show by reconstituted band — Static-X.

Static-X is a LA-based industrial metal band who have recently reformed — sans a key member — to tour and celebrate the 20th anniversary of their very first album (Wisconsin Death Trip) – released in 1999. 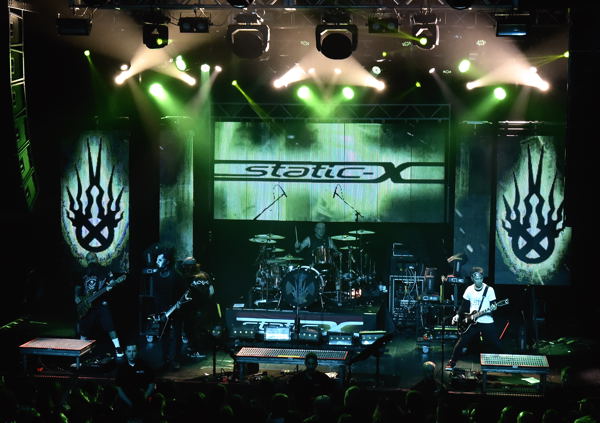 During 2014 – tragically their founder, main lead singer and songwriter – Wayne Static died at age 48 – which did throw the future of Static-X into an obvious limbo.  However the band which did have other line-up fluctuations during it’s history — decided in late 2018 to reunite with original members Tony Campos (Bass), Koichi Fukuda (Guitar) and Ken Jay (Drums) resetting a new foundation to move forward.

In an ongoing tribute to their fallen brother Wayne Static — Static-X currently does their electrifying shows with an un-named and masked lead singer who is dubbed simply “XerO”.   Speculation about the identity of this guest singer does run rampant — but that rather doppelgänger unknown is part of the attraction for this particular tour.

At London, which was stop #10 of their (30 show) road venture, the band played a great mix including some of their thundering classics as well as introducing some new material which will be on their forthcoming new album – called Project Regeneration.  Allegedly some of those songs feature ideas by Wayne Static himself which were not taken to fruition because of his passing – but which the rest of the band then interpreted, adopted and ran with.   (Now how cool is that!)

Regrettably I never did get the pleasure of seeing Static-X when Wayne was with them — but tonight I did witness I guess the best next option.  I certainly did come away with that essence as well as a vivid reminder of just how good an industrial band they were (and still are).

Rumours do have it that based on the success of this tour and (soon to be released) new album, that Static-X could very become an industry fixture once again with a permanent singer and even more touring.  Now that’s some static noise we can all live with.