Steel Panther is best known for their brand of shall I say, ‘comedy 80’s metal’ or perhaps even ‘sex metal’ or Party Metal or Glam Metal or Hair Metal?  Whatever, I just want to say Hard Rock/metal but these guys are just so damn hilarious to watch. 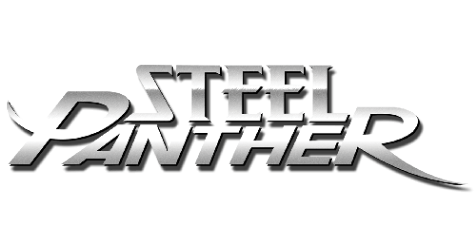 Personally, my teens were smack dab in this era that the Panthers gleefully take advantage of and are influenced by.   They never seem to take NOTHING seriously and they are not afraid to ham it up to the max.  Nor do they conform to anything like the present #METOO era and absolutely do not waiver at all in any of their recent music or shows.    The band lineup still consists of vocalist Ralph Saenz(“Michael Starr”), drummer Darren Leader (“Stix Zadinia“), bassist Travis Haley (“Lexxi Foxx”), and guitarist Russ Parrish (“Satchel”).  Lexxi was out for a short period where the band announced he was in sex rehab (whether that is the real reason we don’t know) but the lanky blond bassist is back here in Vancouver strutting about the stage, adjusting his makeup and spraying hairspray as per usual. 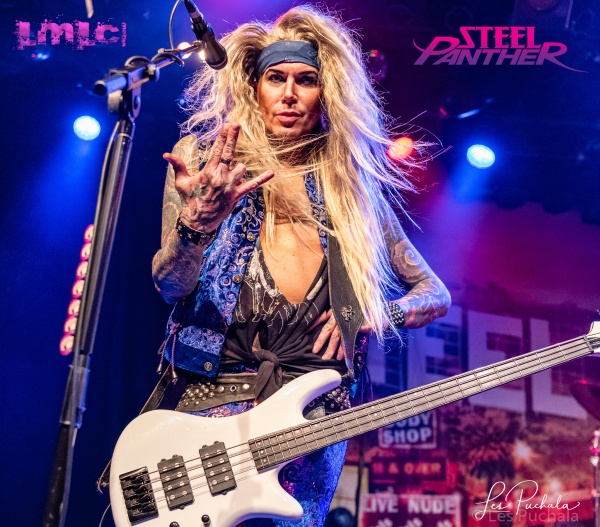 What do you get at a Steel Panther show anyway?  Well you get a lot of jokes, trash talk back and forth about penis size and liposuction.  Ok that is just the between song banter, which there is a lot of, but you get some GREAT stuck in your head songs too!  Name me a band that gets away with songs like song number two and three in the set, ‘Goin’ in the Backdoor’ or ‘Fat Girl’.   No band has the balls to do what they do next, when they invite two Asian ladies up stage and then sing the song ‘Asian Hooker’.  How do they get away with this is total comedy in itself.    At one point he serenades a young lady on stage with the song ‘That’s when you came in” (https://www.youtube.com/watch?v=bPok37tveN8&list)   Micheal Starr has a lot of talent with the great vocals to do this 80’s metal style.  He can sing cleans and scream with the best of the 80’s singers, no problem.  Saw that tonight with the 10th song where they do a Van Halen cover of ‘Jump’.

Of course they invite like 20 women on stage to party with them while they do that performance.  Girls gone WILD moments!   Mr Starr is also a Ozzy impersonator too, doing some Ozzy and dressed just like him (see my pic below on that).  Another highlight of the night was a special guest named ‘Chaz’ came on stage to sing the Metallica cover “Enter Sandman”.  Actually ‘Chaz’ is none other than the lead singer of Multil platinum recording artist Chad Kroeger from Nickelback.  Chaz (Chad) did a good job of covering that song too!  You also get Satchel, (who is a very underrated guitarist I might add) doing some crazy guitar solo work, as well as playing the bass drum along with some cuts from Scorpions, GN’R, Black Sabbath and others.  Crazy stuff!

The show ends with ’17 girls in a row’ and ‘Gloryhole’.  I will not get into their meaning as you can use your imagination as to what they are about!   If you can take these guys NOT SERIOUSLY like they do themselves, you will have a fantastic time at a Steel Panther show.  They are prepping for a new album hopefully in 2019 and I CANNOT wait for the shenanigans that will be on that album!