Previous Scatter The Rats – Coming May Three!
Next Michael Schenker Fest (Germany)
THE SOUNDTRACK FOR THE FIRST EDITION OF MONTEBELLO ROCK IS NOW HERE!

The Montebello Rock team is happy to unveil the bands that will be providing the soundtrack to the Montebello rock party experience this year!  As promised, this first back to the roots edition will be reminiscent of the early years and will present 30 punk, metal and hardcore bands on June 14-15.
On the international front, California pop-punk pillars MxPx will be back in Montebello after a 5-year absence.  Legendary British black metal act Venom will be back in Canada for the first time in 5 years and so will punk pioneers Black Flag.

On the local front, Quebec punks Vulgaires Machins will be back for a rare reunion show and its sole Western Quebec concert.  Punk band The Sainte Catherines will also be reuniting at the festival and so will Fifty Nutz.  Several Montebello classics will be back, including Mononc’ Serge, Anonymus and Reset.  Two South American punk/metal acts will also be performing in Canada for the first time ever : Perros de Reserva from Colombia and Difonia from Peru. 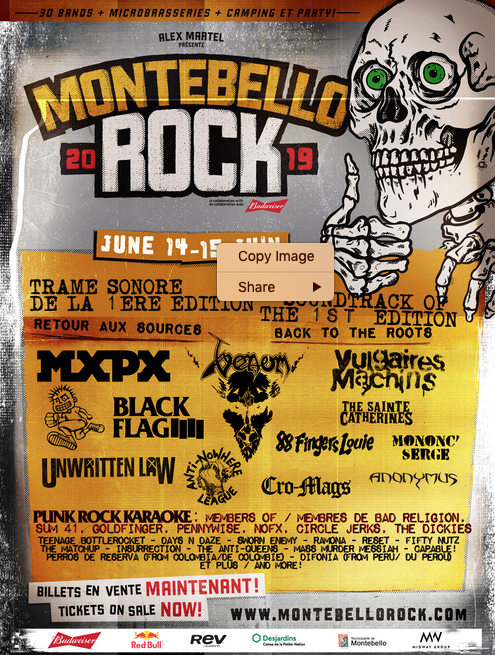