Previous New L7 At The Cusp!
Next Crowbar (USA)

It was a LMLC Media “road trip” to Seattle’s Showbox Theater to checkout one of the heaviest bands on earth – Cannibal Corpse!

This SOLD OUT show has Cannibal slaughtering us with their latest masterpiece released in 2017 – “Red Before Black”.  But that is not the lead story here.  Lets address the white elephant in the room first……..the absence of lead guitarist Pat O’Brien.   By now you have all heard the story of why he is not touring at the moment with the band.  Pat had abit of a personal mishap at his home in Florida (to put it very mildly), we wish him well and hope to see him back in the band soon.  But until then, they brought in Erik Rutan from the band Hate Eternal, whom has also produced the last four Cannibal Corpse albums too (Kill, Evisceration Plague, Torture, Red Before Black.  Rutan has shaped Cannibal’s sound and direction massively over the years, making them one of the most savage sounding bands ever.   So how is he on guitar?  He was just about flawless this night, and fit in with the band like he has played for them for many years.   They could not have picked a more qualified guy to take Pat’s place, as he had all the solos down as well as the brutal distorted sound we are used to hearing.

First song of the night, ‘Code of the Slashers’, from the new album already has the crowd head bobbing to its slow guitar start……..then George “Corpsegrinder” Fisher kicks in.  Wow, his vocals are absolutely deep and guttural tonight, so ferociously good.  I have seen this band many times over the last 20 years, and Corpsegrinder is STILL is on top of his game.  There is not one death metal vocalist that I know that can hold a candle to his terrifying growling beast.  Besides, you could never hold a candle next to him anyway, as he is THE best windmilling headbanger on the planet.  I was standing right in front of him with my camera and I could feel the breeze that he propels which is just astonishing.  How he does this night after night is amazing.  But look at the dudes neck!  Most NFL linebackers don’t have a neck like that!   His on-stage banter between songs is priceless.   Betting the crowd that no-one can headbang like he can.   He is right, no one out does him.  Not even close.

They hit two more off the new album with ‘Only one will die’, ‘Red before Black’ and abit later also ‘Firestorm Vengeance’.  One of my favorite Cannibal songs ever, ‘Staring through the Eyes of the dead’, we get Rob Barrett and Erik Rutan in some dueling guitar.   Rob is steady as ever, no issues with him either, as he can still grind out those single notes.  A bearded Alex Webster tonight as well, is he sporting a new look lately?   Keeping that low end thumping bass on ‘Scourge of Iron’, along with other founding member Paul Mazurkiewicz on drums.  Can you imagine doing this as long as these two have?  They have been at it since 1988  and are the heart and soul of this nightmare known as Cannibal Corpse. 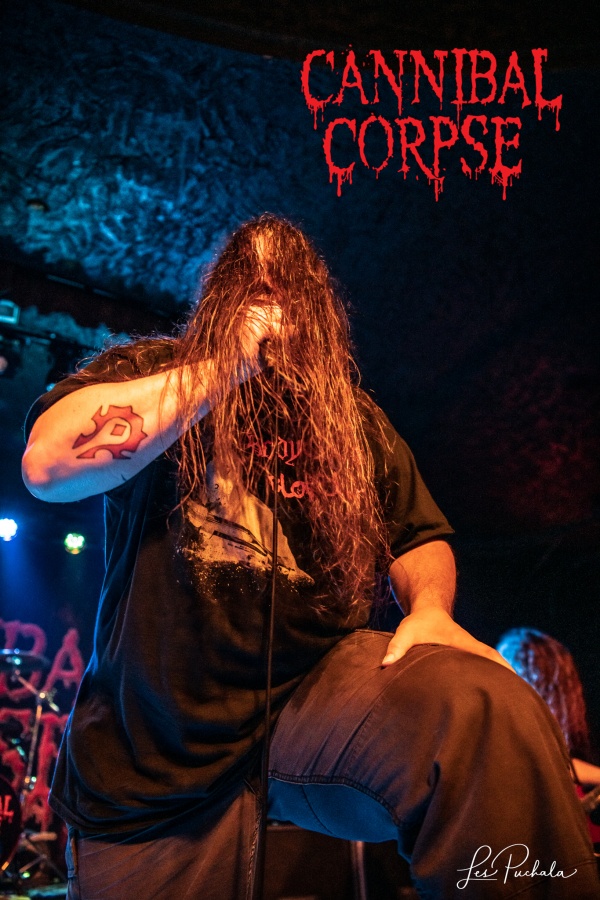 We are treated to 15 of some of the nastiest songs ever created this night, no ballads here.  The last two being ‘Stripped, Raped and Strangled’ and their quintessential show ender, “Hammer Smashed Face”.

Another incredibly head crushing display of metal from Cannibal Corpse.   They NEVER disappoint. EVER.