Canadian multi-platinium band Three Days Grace makes a visit to Abbotsford BC at the Abbotsford Centre  courtesy of Live Nation promotions.  The band was on its 2nd last stop of a 16 city Canadian tour from Coast to coast touring in support of their latest 2018 opus “Outsider”.

It’s been awhile since I have seen these four gents from Ontario, that being Barry Stock (Lead guitar), Neil Sanderson on Drums, Brad Waist on Bass and his bro Matt Waist on vocals.   Last time I saw them – jeez – maybe 10 years ago, they had original singer Adam Gontier, and admittingly I was skeptical on how this would pan out.   Well I must say, I was pleasantly surprised with Matt!  The guy has great vocals, as well as being a very entertaining front man for this band.  Didn’t take me long either as they start with a new one called “The Mountain”, that contains some hooky vocals and guitar.

Hey wow!   This band is has stepped up over the years with a nice stage setup, large visual screens, and Neil up top on a big drum riser.  They sound pretty top notch as well in the arena atmosphere in front a few thousand fans here in attendance. 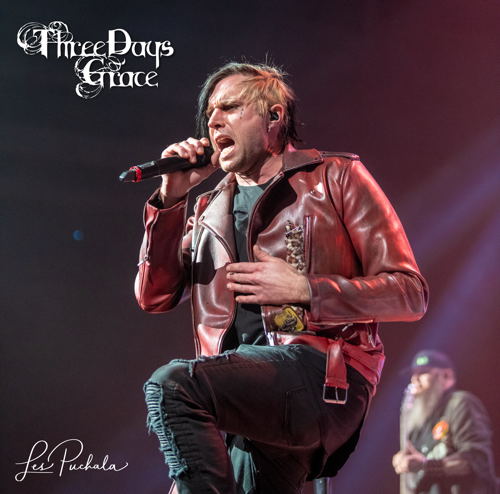 Jeez, these guys must be coming from the cold prairies (Edmonton was the last show so maybe thawing out?) with Matt wearing a stylin’ leather jacket (takes off by song 3) and Barry wearing a trench coat (like all night too!  He must run cold).  I was thinking that Barry has a ZZ-Top thing going on with that beard , hat, and trench coat.   In fact later in the show he does a couple minutes of ZZ’s“Cheap Sunglasses”, pretty good too!.

One of my favorite songs from their catalog, “Pain”, had my foot stomping really good by the fourth song in the set.   They definitely had the crowd going by that time with some clean vocals and some heavy guitar in the chorus.  The one I was really curious with is their 2003 breakout song “I hate everthing about you”.  Never heard Matt sing that as of yet, but he does a great job of it live and I am pretty stoked about that performance. Overall,  It’s a really solid 90 minutes of hard rocking songs ending this gig with “Riot” to get the crowd moshing one last time.

Really happy I got to see them and I am definitely going to checkout their new album “Outsider” !