It really was some “mysterium from France” when we caught Synthwave/Industrial sensations Carpenter Brut live and on stage in Toronto at Rebel.

This super creative band, which has an immensely popular following within the European scene, but rarely if ever are seen in North America, do go out of their way to maintain their anonymity — insisting that both their band member names not be mentioned as well as photography of them on stage be tethered — artist desires that we totally respect.

Instead Carpenter Brut chooses to let both it’s music and stage art speak for itself — and I’ve got to tell you — that’s impactful.

I’ve been a big fan forever of iconic early industrialists Front 242 (from Belgium) and I would suggest that Carpenter Brut’s sound and presence might be a comparable.  This three piece unit, consisting of keys, drums and a single guitar, delivered a very high energy and exciting sound wave — an onslaught that I might describe as a fast forward and harder edged version Front 242.

The band members played their set mostly in the dark — using a lot of backlighting as well as multiple large video projection screens which cycled the strange, suggestive and very creative visions that are also a product of Carpenter Brut’s primary creator.

After seeing this show — we feel privileged.  And as self-proclaimed connoisserurs of industrial music — we highly recommend you do a taste test for yourself.

For more information on Carpenter Brut — click on the band logo below: 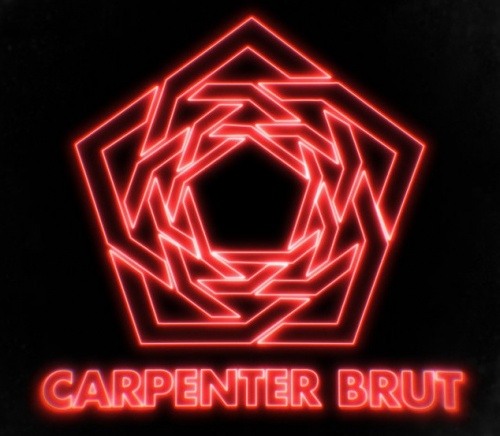