For sure we were super pumped to have the privilege of a hook up with Canadian hard rockers the Cancer Bats during a touchdown at the London Music Hall.

This relentless hard core band (originating in the Toronto area) was making their final Canadian appearance of the year prior to a forthcoming international embarkment for an extremely aggressive overseas tour.  The Cancer Bats were getting set to next play some 38 scheduled dates all over the UK and then Europe between late January and March 2019. 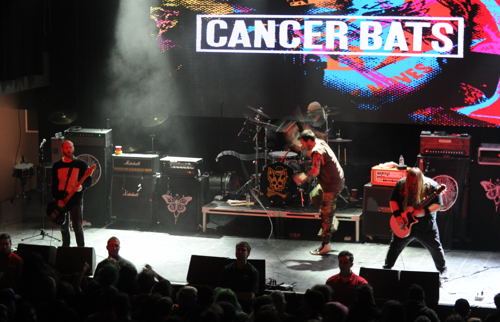 In front of a great and appreciative crowd, the London Music Hall event proved to be a nice tune-up for all that to come, as the band continued to build public momentum for their newest album — 2018’s “The Spark that Moves”  — which is their sixth full length project since their inception back in 2004.

And that album name “the Spark that Moves” is certainly perfectly applicable to the band’s dynamic lead singer and co-founder – Liam Cormier too.

Everyone in attendance could not help but be struck by Liam’s over the top high energy and on stage aerobatics which he maintained seemingly effortlessly throughout the complete evening set. Liam truly is “the Spark that Moves.”

I personally first jumped on the Cancer Bats bandwagon back in 2008 after hearing that year’s critically acclaimed release “Hail Destroyer”  where I remember getting slapped around by the intensity and quality of memorable cuts like : Let it Pour — Deathsmarch — and of course Hail Destroyer.

It was right then and there that it struck me that Liam is a pretty special commodity.  He has what I consider to be a near perfect voice for a hard core rock singer.  For that, we are not fans of any goofy harmonizing — we prefer just outright aggression and banter — and Liam and the Cancer Bats offer up what we consider to be a perfect fit within this rock and roll genre.

Liam along with band members, Scott Middleton (guitar), Jaye Schwarzer (Bass) and Mike Peters (Drums) have stood the test of time and do really stand above with their sonic craft, which remains relentless and exemplifies their strengths.

Cancer Bats would get my vote as the most underrated Canadian hard core band ever and I know that true connoisseurs of hard core music out there realize and agree they are truly a premium Canadian export product.