Avatar come back again to Vancouver to HEADLINE a show at the Commodore Ballroom presented by Live Nation.

If you recall last year’s review (http://loudmusicloudcars.com/2018/11/avatar-sweden/ ) — I was hoping we would see them here in a headline position — so my wish came true and they bring their full stage setup!

No lineup changes to report either!  We still have Jonas Jarisby (guitar),Tim Ohrstrom (guitar), Henrik Sandelin (Bass) and on drums John Alfredsson. Lets not forget the maniac John Alfredsson on vocals, whom is suffering with a cold virus this night as well.

So being that this is a headlining show, we get a whole different spectacle from Avatar.   They have the stage covered with a giant curtain. At show start, that falls, and we see Jonas playing the King whom is sitting on a throne above the drum riser, playing his guitar.   On the front of the stage we have John (on vocals) step up to a red pulpit as they start with ‘A Statue of the King’ from the newest album “Avatar Country”.  There-after the King steps down from above, they move the throne chair to the very front-centre of the stage with Jonas back sitting on the throne for ‘Legend of the King’.   This certainly had all the photographers in a cluster, getting great shots of the king up front!

‘Paint Me Red’ is next, with the red lights on the guys, we get a large ‘Avatar’ sign in back glowing, with some light effects.   Being that they are the headliner, they definitely leveled up with the lighting.  Lots of crazy laser lightening that surrounds these performers during various songs, especially during the 5th song ‘Bloody Angel’. 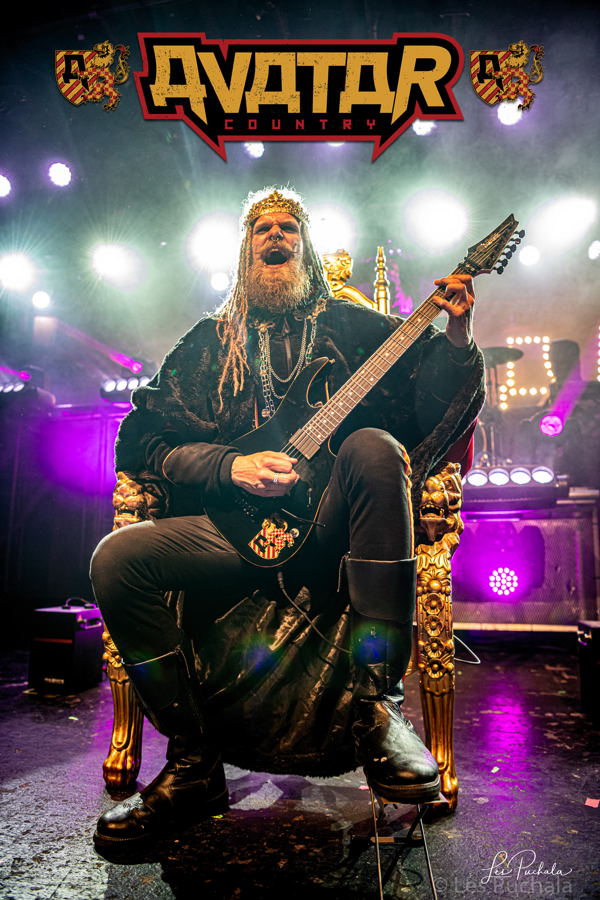 Other highlights we hear tonight are ‘Get in Line’ and the 10th song ‘Puppet Show’.  Puppet show was interesting as John plays the Trombone solo, which fits amazingly in this circus-like atmosphere they create. My favorite of the night is the staple “Let it Burn”, 11th song this night.  This one really gets the audience hopping with that finger picking guitar they do along with the synchronized wind milling head banging style.  Such a fun song.  By this time you start to hear John’s voice breaking up during pieces of it due to him being sick.  But I tell you after 17 songs in total tonight, you wouldn’t know he was sick with the showmanship he displays this evening.

Lastly, we get into the final two songs starting with “The King Welcomes you to Avatar country”.  They appear in different outfits and the bubble machine is set to high as this is a true carnival of a metal show at this point.   The last song is “Hail the Apocalypse” is another of the more heavier songs they do which is a great ending to this headlining show.   IF you never have been into this band or heard of them, I guarantee you will be thoroughly entertained by their show they put on.   I am looking forward to the next album, and to the next time they come back!  Highly recommend.